Every day I struggle watching people figure out how to load their bikes on caltrain.   Every day, the same type of people get on, and go to the same places. I wonder why is there not more structure that gives people guidance on where to put their bikes.

Here is what I came up with.  The idea is to have the people riding on the train the longest be closer to the back. This will help the train go faster to its destination, but also minimize bike overlap.

For people Going Inbound to San Francisco: In the mornings:  most people get off at SF.  Thus, bundle the most spots for SF.

For Leaving San Francisco in the evenings: People go to many more different locations: Thus, the center areas are for zones 2&3 where I assume most people get off.

This system is not perfect by any means, but its a start.  Ideally, I would like everyone to rack their bikes per rack based on when they get off, but there is an issue with people that get on early, and mess up the whole system.  Thus, having location based racking would be easiest on the most number of people.

Let me know what you think.  I assume posting this will open myself up to criticism, but thats ok. Critiques are part of putting your work out there.  If its a swing and a miss, thats okay too. 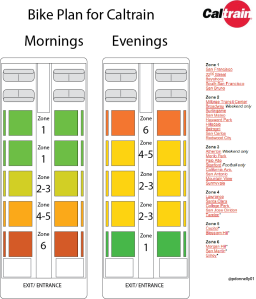