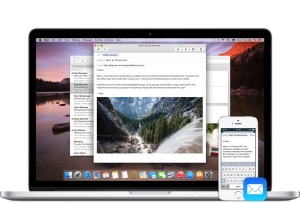 WWDC introduced a number of features on monday that really showed off some impressive applications of responsive user experience ( I feel like I should coin that term ).  Several things stood out, but one thing in particular – “handoff.”  A lot of apps were designed to run the same content in multiple browsers and device sizes but the experience always had to be saved, and then reopened in another window.  The fact that you can do this in a ubiquitous way is huge.  This represents a new way of working where you never have to pause or exit while transitioning between devices. Instead of responsive consumption, we can finally have responsive production.

Another interesting question is if this will support cross device cookies for advertising?  I could imagine if that if you could track a mobile website going to a desktop version, you could also track conversions between different iOs and web browsers for retargeting and digital ads.  This could be really powerful for advertisers and marketers alike.

Windows 8 created an experience that allowed for windows to be scaled across devices. iOs has taken that to the next level where they can truly be used across devices without interruption.

I cant wait for fall to come so we can try this out in person, but I am more excited to see how this changes workflows for everyday people. Gone are the days of emailing a photo to yourself, or saving something to a google doc just so you can open in at your desk.   When we can actually take things with you, how will that change how we act and plan?

I love seeing how mobile ux designers rethink and look at existing OS and how it could be improved.  Recently this concept video of live tiles appeared on the web that showed a widget / live tile version of iOs for iPhone / iPad.

When windows developed live tiles, it was a shock, but it made sense.  People wanted access to their content faster. The buttons to access those feeds were really just a formality.  However, hitting those buttons were a legacy interaction that was baked into the system, but also expectations of how a UI was “supposed” to work.

It has been universally agreed upon that as many user experiences are based on feeds, that it starts to make more sense for UI elements to simply be viewing windows of data rather then buttons that view that data – skip a step, right?   There are many ways to express this. I personally believe that the windows phone UI was a very elegant solution to this, however it is worth noting that Android introduced some widgets that addressed this early on as well.  Not everyone agreed this was a good solution, but many people have embraced it.

Apple is currently using push notifications to bring feeds to your screen while asleep.  In essence, it performs the same utility, but with a less sexy interface.  The design question at hand is at what point in the mobile experience do you want to access what type of data? Both have advantages.

Where I am fascinated by this suggested UX idea, I am even more interested in the areas where IP law overlap with Mobile UX.   Even if this solution maybe be better for a significant amount of users, there starts to be areas where a manufacturer cannot go due to threat of infractions on another companies idea or IP.  Even if people love this, apple may not be able to innovate here in fear of legal action from Samsung or Microsoft.

I question as creator, are there areas where the law should not limit the evolution of design progress.  I understand the need to protect an artists work, but I also fear that legal can in some instances prevent UI from growing, thus decreasing overall utility of an entire system / generation?   I am not a lawyer, but its a very interesting debate, in many verticals and progressions.  At some point, lessons learned should be shared with the greater group if they benefit all users.

Even though I have a few critiques for this specific design solution, I applaud any designer who puts their work out there for the public to judge. We need creators more then ever in this time of automation and optimization.  We always need both, but new ideas are rare, even if they are heavily influenced or recycled. The first step is to attempt to create something of value and improve the human condition.

Phones got a lot smarter in the last 10 years – now its time for cars.  Dumb Feature Cars, will become smartcars in the next 2 years.   I say Cars will become a Platform for Technology, because there are so many options.  From self driving, to touch wheels, to sensors that have yet to become developed.

Lets consider cars the most beautiful and fast computer that happen to sit in – what would you want it to do.  Let’s go beyond satellite radio and an iphone dock.   Mini is making some great strides, apple too with CarPlay, and lets not forget Tesla who has the largest display of any manufacturer and their system is a full operating system, not just an entertainment kiosk.

The larger trend here is that the internet of things will continue to innovate on top of analog machines, and technology ecosystems will continue to overlap – leading to some exciting user experiences and great uses of contextual data.

Carplay is going to be BIG.   While apple could have simply make Cars be more compatible with iPhones, they took it a step further, and integrated with cars.  This is one of the first places we are starting to see an S curve in cars shifting from hardware & mechanics to software.

My personal hypothesis is that most cars are similar enough – antilock breaks, power steering, top speeds, safety, etc.  So the other place they can go for points of differentiation is style or software.  This represents a new era of digital luxury in something that has always been very analog with digital touches.

I will continue to write about this in a few different posts – but this will really change things.

We are starting to see that networks are overlapping with other networks – which is an entirely new level of contextual awareness for machines.  Its the start of something really new.

It brings up some really interesting smaller and big questions including:

1. Will you choose a car based off of what carrier it has?
2. Will you service your car at an apple store or your local garage ?
3. How do you manage multiple drivers?
4.Are you allowed to download while driving?
5. What does this mean for privacy?
6. Could apps move into things that are essential car functions such as AC or performance?
7. Who would have thought Google & Apple would be large players in the auto market?
8.The idea of Cars as a platform, not a thing.

I love hands free, but apparently my iphone doesn’t know its in my car.  It seamlessly can answer calls, or play music through my cars speakers, but thats about it.  Everything else is just about it being mounted on my dash.

Why doesn’t the UI of my phone change when its connected to my car via bluetooth?

Let me first say that I love apple products.  However, as a driver, this most recent iOs update made is very hard to perform basic functions while driving. I am not talking about using Siri or playing a game, I am specifically talking about how the button to hang up the phone went from 2 inches rectangular to 1/4 inch circular.  Thats a big difference while you are driving.  I expect for the UI of my phone to become simpler and bigger while I am driving.   I do agree that is looks better, and is more cohesive, but that is not the point I am making here. I am talking about usability of a smart device during certain types of activities. Phones need to become more contextual to meet our needs.  Context doesn’t have to be magical, however connected devices should give clues to a phone about how it could work and behave.

My phone is beautiful, but I am waiting for the utility of it to catch up to my expectations.

With the new A7 Chip, all movement in 3 dimensions can be tracked.  Vanity sensors that were robust for 3rd party hardware ( fitbit, fuelband ) may now be obsolete for the casual user. The iphone 5s may just have changed the way that athletic data is created and consumed.